What is the difference between White Tuna and Yellowfin Tuna?

It is common to confuse tuna and l white tuna since they both belong to the tuna family. Despite belonging to the same species, there are certain differences that make white tuna a superior raw material .

It is important to mention bluefin tuna due to the boom it has had in recent times, commonly linked to Japanese cuisine.

The white tuna is a fish that migrates to the waters of the Cantabrian Sea to feed, regain strength and reproduce. It is precisely in these waters, where it is fished using traditional gear between the months of July and October.

It has a length of up to 140 cm and weights of up to 60 kg. It differs from bluefin tuna in that it has a larger pectoral fin than that of bluefin tuna and dark oblique stripes on both sides of the dorsal zone.

The white tuna represents the top of the range among tuna, differing mainly due to its exquisite flavour, smooth texture and white tone, while yellowfin tuna has a more reddish color and texture that is not so delicate.

Yellowfin tuna, yellowfin or light tuna is a type of tuna found in the open waters of tropical and subtropical seas worldwide and throughout the year. Younger specimens usually form large banks near the surface, while adults prefer depths.

They usually reach sexual maturity when they reach a length of approximately 40 cm and can reach 200 cm.

As a curiosity, this type of fish lacks mechanisms to maintain the flow of water through the gills, so it must remain in continuous movement, if it stops swimming it dies from anoxia.

It has a robust body with a bluish color, a very consistent meat and an intense, very penetrating flavour, with a colour that tends towards red. In Spain, it approaches the waters of the Cantabrian Sea during the summer, where it reaches a size that ranges between 20 and 50 Kg,

This type of tuna is not used for canning since it has a very high consumption when fresh and does not reach the canneries.

It is a highly appreciated tuna in Japan and in recent years its consumption has become very popular and widespread in our environment. 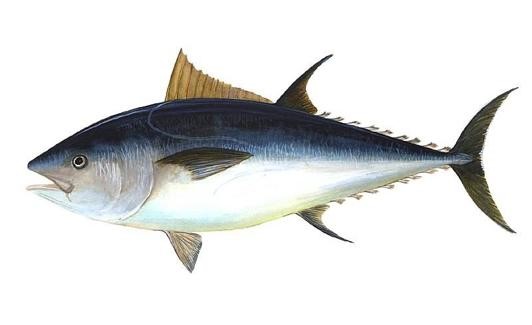 We at Conservas Nardín only work with the beautiful and fresh white tuna from Getaria's trusted ships. That is to say, 3 or 4-days fishing, bought in the fish market at 7 in the morning that will be in our facilities the same morning and in the afternoon it is already can-packed and ready to be stored with care for a period of two years before going to market. In this period what we achieve is that it rests and matures in an olive oil that gives it juiciness.